Queen of the Ruins (The High Crown Chronicles Book 2) 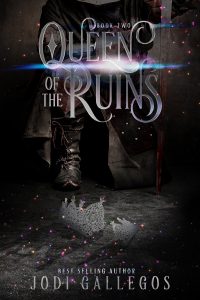 While the war between the kingdoms grows, the long-forgotten gods are beginning to take notice. And one of them has been waiting for this moment for a very long time…

Malory has survived betrayal, an assassination attempt, and the Battle of Allondale. But months later, with the Unified Kingdoms at war, she is a queen in name only. All she rules is in ruins and her enemies won’t stop until she and Jamis are dead and their lands claimed.

Hidden deep in the forested Argralands, Malory—along with Jamis, Kennard, Katherine, Josef, and Isobel—has been systematically raiding the resources of Roarke and his allies. As Malory and Jamis work to bolster their troops so they can finally conquer their enemies, a new threat emerges that leaves all the kingdoms at risk. But ever-shifting alliances and a broken unification leave Malory questioning loyalties—even among those closest to her. Can Malory build her armies before a devastating loss brings her to the brink of her own ruin?

Queen of the Ruins picks up seamlessly where The High Crown Chronicles left off and draws the reader more deeply into this world of stunning imagery, dynamic characters, and shifting political alliances. A blend of dark, vengeful tone and deeply emotional moments will draw readers through this action-packed novel and leave their hearts thundering until the final page.