Something happened over the weekend. Actually the “happening” of it has been in the works for a while, it was the “blowing up” of the situation that happened this weekend.

As a disclaimer, let me say that I don’t believe I’ve read or typed the word “cocky” so much in such a short span of time as I did over the weekend (and then while writing this!).

Now, for those who didn’t hear about “Cockygate” let me offer you a condensed version (for all the dirty details you can certainly search the #cockygate hashtag on Twitter!): 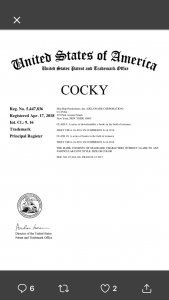 Faleena Hopkins then took it upon herself to contact authors of books with “Cocky” in the title and threatened legal action (note, Faleena Hopkins NOT her attorney, sent out the threats):

The authors who were contacted were understandably upset. They’ve written books, marketed them, had them listed under the current titles for quite a while (and trust me when I say that marketing and promotion is a time-consuming endeavor!). Suddenly, this chick is contacting them, telling them they have to change the titles of their books or face legal action. Some of them reached out for support, or with questions, (I’m not sure where the actual spark came in) and an explosion erupted throughout the romance writing community, as well as the creative arts community at large. New hashtags were born (#cockygate, #ByeFaleena, #FreeCocky) and the outrage spread.

“Of all the Cocky and bull things…”

So, why is this a thing? Cocky is one word, right? Well, yes, it’s one word. One very big word (no play on words intended!) because of the implications…

First, let me say that I understand branding and that Faleena Hopkins has an entire series called The Cocker Brothers of Atlanta, and each individual book includes “Cocky” in the title. She claims that her readers were becoming confused by all the “Cocky” book titles and they were purchasing books they thought were hers, only to find out that wasn’t the case (which, a- maybe the readers can check the author name before purchasing a book they think is hers and b- you can always return a book if it isn’t what you thought you were buying…). Her claim is that she pursued the trademark to secure her branding and the integrity of her series.

Why the problem? Well, one person is taking ownership of a word. A word!! By pursuing a trademark on the word “Cocky” she has prevented any other romance author from using the word “Cocky” in their e-books. This is a big deal when you consider the genre and subgenres this affects. The romance industry, and specifically the more, erm…sexy works within that category produces a substantial number of titles every month! One of the things that draws readers in is the imagery the title creates. If you’re searching for a spicy romance novel the word “Cocky”, and its double entendre, leaves no doubt about what kind of novel you’re getting. The number of books with “Cocky” in the title is staggering. I just entered the word into Amazon as a book search. There are over 1,000 results!

Not only is Faleena Hopkins personally threatening authors, she’s involving Amazon and authors are having their book listings removed. This is an action that’s notoriously difficult and time-consuming to get reversed, even under the best of circumstances.

The writing industry is, in general, one of the most supportive peer groups I’ve ever experienced. It’s full of cheerleaders, well-wishers, mentors, collaborators, and people who will, at any minute remind you that we’re all in this together. One writer (and I’m kicking myself for not saving this message!) said she was appalled to find out, upon the release of her book, that another with the same title had been released just before her own. She contacted the other author, explained what happened, and offered to change her title. The other author told her “No” and wished her the best of luck with her book.

There are a number of books in the world that share a title name: The Cloud Atlas (by both David Mitchell and Liam Callanan); Possession (by A.S. Byatt as well as Ann Rule); Forever (by Pete Hamill and also by Judy Blume); Elsewhere (by Richard Russo and again by Gabrielle Zevin) just to name a few. Imagine how quickly the word choices would dwindle if each book had to utilize unique words, or a unique combination of words.

This issue will have a strongest impact on book titles with 1-3 words, and specifically in the romance e-book trade. Though, if I were to re-title and release my own book as A Cocky That Defies the Dark (not that my publisher would go for that, lol!), I’d be in trouble.

Now imagine the implications of authors being allowed to trademark individual words.

What if a mystery author were to trademark the word “Murder”?

What if a sci-fi author trademarks the word “Space” for a title?

How long would it be until books were titled “Book #…” or “Book of…”, well at least until someone trademarks the word “Book” in a title.

This is all to say that to actually pursue the trademark of a single word in a title is a selfish move. It says that you put more value on yourself and your work than on anyone else in the world. To imagine that you’re entitled to the sole, proprietary use of a word–a word!!!!–is the most self-centered thing I’ve heard in a very long time.

And speaking of cocky….

And so, while the romance writing community was blowing up Twitter (and Facebook) this weekend, Faleena Hopkins, romance author and trademark owner of the word Cocky (which is now apparently under appeal with the US Patent Office), posted on Facebook about how she was being attacked online…while also posting this on Twitter. 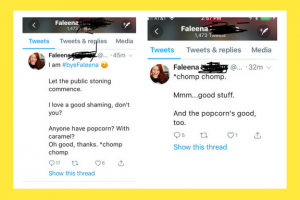 Doesn’t really strike me as someone who feels attacked, or even like maybe she misjudged herself a wee bit.

So, that’s the update, and my 2 cents worth, on the #Cockygate issue. The lesson I’d like to leave you with is that words are intangible things that we all use to express ourselves and to share our life experiences. Without the free use of language our ability to create and express ourselves is hindered.

One Reply to “On Cocky Novels, Cocky Authors and #Cockygate”