In case you haven’t read 13 Hours in Benghazi, it’s a good book which gives the full account of the operatives who were on the ground, and under fire, when US personnel were attacked in 2012. I had the honor of attending an engagement in which three of those operatives–Kris Paronto, Mark Geist and John Tiegen–spoke and I remember thinking immediately, “This would make a great movie.”

Several months later this is how I found out about the movie:

Someone: Did you hear that they are making a movie about that 13 Hours book?

Me: Really? I knew it *fist pump–or some other ridiculous gesture of triumph*

Someone: Michael Bay is going to direct and John Krasinski has already signed on.

Me: John Krasinski?!?! The dude from The Office? *checks the internet, certain this was a monumental mistake on Someone’s behalf*

As it turns out, John Krasinski–from The Office– had indeed been signed. (?)

To clarify, I wasn’t horrified at the thought, but was admittedly a doubter. He seems like a nice guy, he’s cute and decent and, well, funny. How would that translate in a movie which is based on thirteen hours of intense danger, gun fights and the bad ass heroics of men who had served in the real life special forces?

And so, I waited…and waited..and waited (Dear God, it seems like I waited for this movie a lllooonnnggg time–a curse of the book to movie lover). Finally I saw a still of John Krasinski in character. 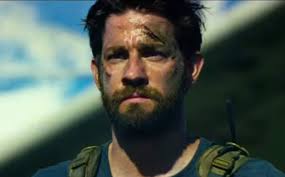 “Well, he looks the part.” I had to admit. (Loved the beard, by the way). But, would he be able to be as intense and serious as I imagined the role called for or would there always be a Jim Halpern gleam in his eye? The trailers rolled out and I just couldn’t tell. And so I waited…and waited…(Damn the waiting!!!). This weekend I finally got to see the film adaptation of 13 Hours in Benghazi.

13 Hours: the Secret Soldiers of Benghazi was a solid movie. I think it was true to the book (and, according to the men it’s based on, was also true to the actual events), Michael Bay did not go too crazy with the explosions (which, lets admit it, was a real possibility!). Most importantly though, the actors were great. The biggest surprise though, John Krasinski is great in action movies. He was serious and walked like a guy who was used to kicking ass and had made a career of it. In an early scene he had the deadpan, steady gaze of a man who was just daring someone to “Go ahead, punk. Make my day.” 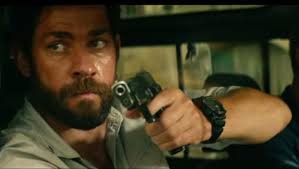 Really, who’s going to mess with this dude?

So, now I have to make the official announcement that John Krasinski is my new favorite action movie actor…ok, action heart-throb too, I mean, really, now he’s a cutie and has a dangerous edge to him. Now, if only he’ll make some more action movies, because honestly, I can only stand so many Rom-Coms (blech!).