It’s that time of year again. The flowers are blooming, summer is just days away, and somewhere in America, some asinine music teacher decides that one more program has to be thrust onto every unsuspecting parent who has a second grader within her grasp. Oh yes the Spring Musical. We gather with our smartly dressed families, charge the batteries of our cameras and check to be sure that we have plenty of memory/film/tape to record every excruciating screech sweet melody. Mostly though, we are hoping that our camera is running when that one asshole parent does something humiliating. Well, ladies and gentlemen, this year, I was the asshole.

This year’s performance was scheduled for a Thursday evening. Now, since The Hubbin’ works out of town, he not only misses all of these m 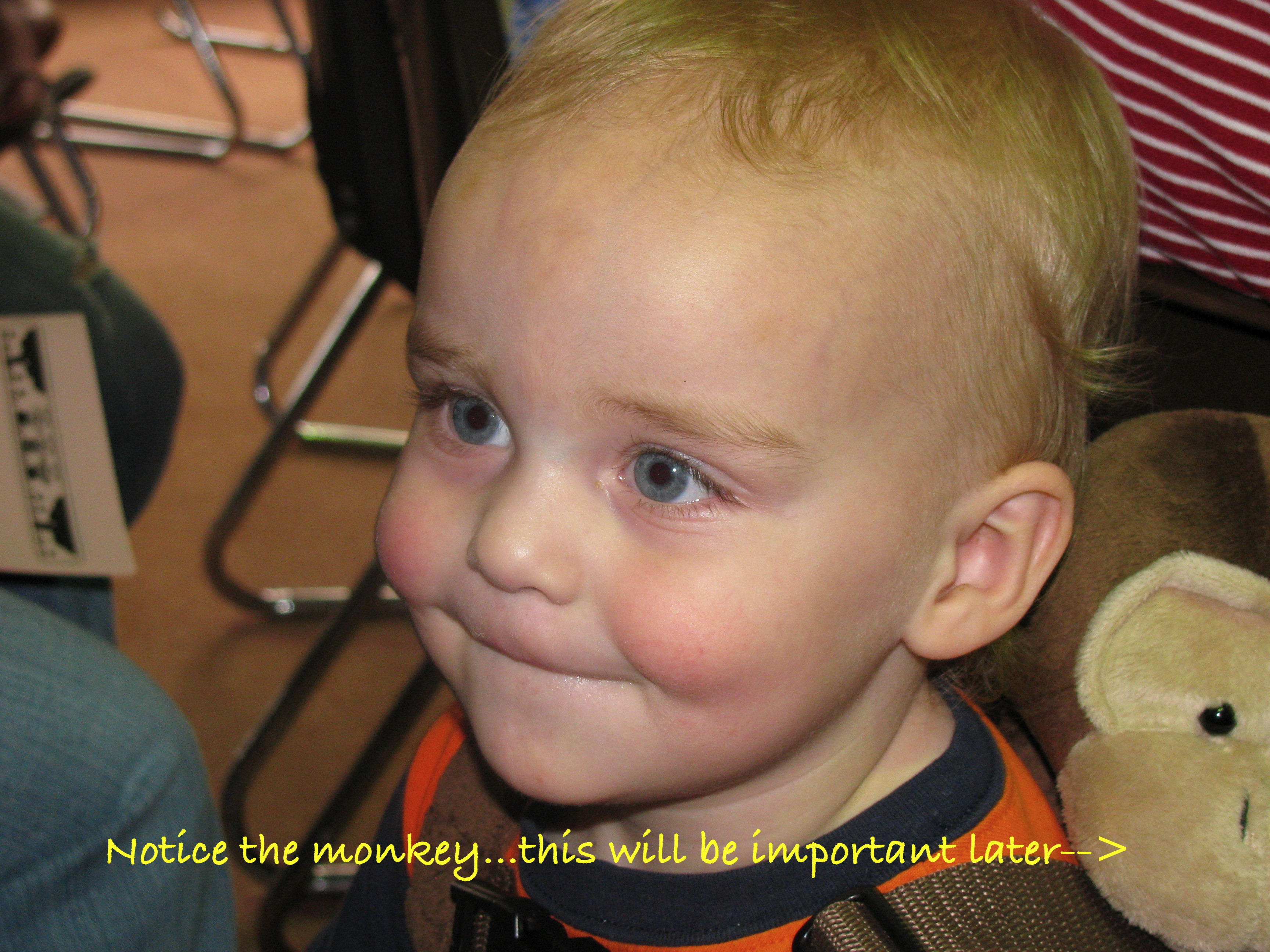 emorable events, he’s also absolved of any guilt when things go terribly wrong, as they so often do when I take my wretched cherubs out in public. Since I didn’t have my second-string available, I called in my support troops (mommy, S-I-L, and da’Niece). The Middle had a baseball game and was firmly entrusted to another family member. So, there I sit, in the elementary school cafeteria, with my ass drooping over the sides of a really, really…really tiny chair (I mean really, with the obesity problem in America it isn’t more economical for a school on a shoe-string budget to buy some big-kid chairs for the times when all the fat-ass families are invited, rather than to keep replacing the really, really, really tiny chairs?). I’m feeling pretty good; the numbers are on my side. One kid on the stage (and he’s really the music teacher’s responsibility at this point) and one little 19-month-old in the audience, surrounded by three adults and a teenager; Yep, all my bases are covered. For those who know the story about the death of rule #37 I even have The Baby in his distance-limiting apparatus (because saying “leash” just sounds white-trash). 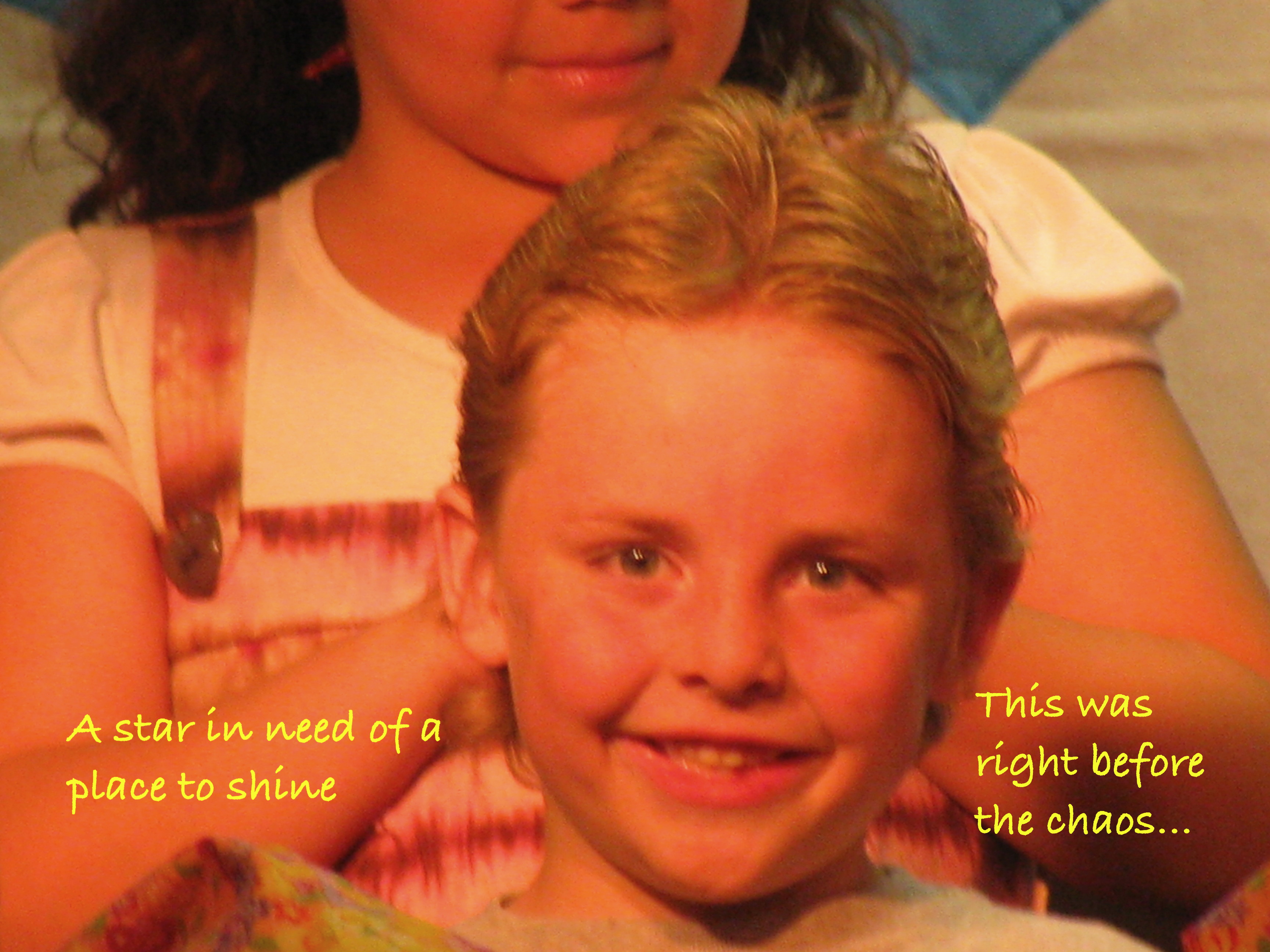 The Three Piggy Opera was fairly well received. The kids are doing their best to carry a tune be mindful of both the tone and composition of each piece. The Oldest, who seems to know on a cellular level any time a camera is pointed in his direction, has his smile-sing-wave-repeat routine down to a science. The parents and grandparents are being very courteous to each other, taking turns crouching in the aisle of the first row to get those blessed snapshots while squatting amid the collection of toddlers and pre-K siblings who are sitting on the floor. My second row seat is the best in the house to see my pride and joy, and also to serve as the scene of what’s about to go down.

The son of one my mommy friends joins the crowd of kids in the first row. The Baby sees his friend and wants to join him. I have the tail of his monkey “backpack” and plenty room so I let him join the group. He was literally an arms length away. No worries.

Here is where the universe began to unfold its diabolical plot to humiliate me in front of all those judgmental parental units who were there to worship at the alter of their offspring (I’m not casting stones, just saying…if it hadn’t been me, I would’ve been JUST as judgmental!).

So, within nanoseconds, a grandpa steps over the monkey tail with his first leg, almost tripping. I let the tail fall to the ground because The Baby is sitting and I don’t want to be known as the deranged mom who broke a grandpa’s hip. As the tail hits the ground and grandpa kneels over the pre-K brigade in the aisle to get his precious snapshot, The Baby, sensing a new degree of freedom, stands. I lunge for the monkey tail as he takes his first unrestrained steps towards the stage. Grandpa shifts back off of his arthritic knee onto the other, blocking my path. I will my arms to stretch like Mr. Fantastic, just enough to grab the tail of my eloping toddler. I’m balanced on one leg, reaching desperately forward with my gigantic ass in the face of the second row (and all the rows behind them) and my saggy, post-breast feeding jugs hanging over a traumatized 4th grader in the first row. Finally (and I think just to get my breasts off of her cheek) the girl in the first row reaches out and grabs the tail of the escaping monkey. And she just holds it, still completely out of my reach. “Just give it a little pull,” I tell her (hopefully that’s the last time she’ll comply with a request phrased just that way). She hesitantly pulls against the rabid monkey who is lunging toward house of straw where the little piggies are holed up and the wolf is preparing to huff and puff. I manage to slip my fingers into the loop of the tail as he lunges again. I give a back and up yank and pull him off his feet and up into my grasp. He is writhing, of course and the instant I get him pulled to my body, I loose my balance and bump into grandpa, right as I hear the click of his camera. Or, more accurately the click of that perfectly composed photo going to crap.

At this point there is nothing left to do but to take my writhing, screeching toddler and leave the room. And I will always blame that damn monkey!