I’m generally pretty amazed by some of the things The Baby comes up with. During his five and a half years on earth he’s proven to be a pretty unique person. Oh, he has his “follower” moments. Case in point, just last night he came into the house crying. He told me he needed a glass of water to take outside because he was going to need to “wash something down”. I, quickly paused my television show to ask some very pointed questions about why he’s crying and what he’s planning to “wash down”. He cried, “The Middle swallowed the thorn off the bush & now I have to do it too”. He was pretty adamant that, “a bet is a bet”. I assured him that his brother is full of crap, not thorns, and that he had no reason to eat one himself.
Aside from things like that, though, he’s his own person. That is very clear today as he has been up since 6 am waiting for his dentist appointment. While other kids have to be dragged and drugged in order to assure proper dental hygiene. My kid was dressed and ready for his 11:00 appointment by 6:15! 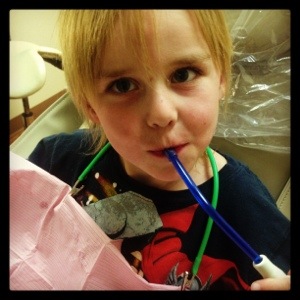