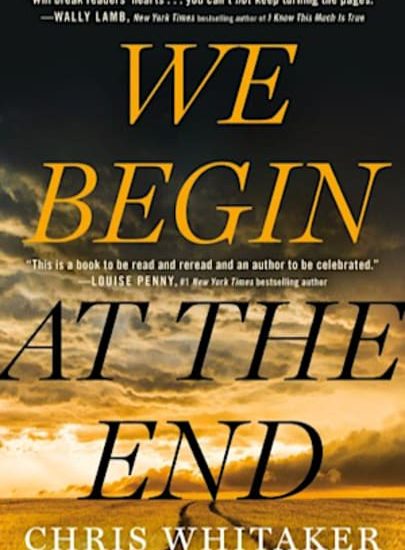 Set in the small towns of Cape Haven, CA and Copper Falls, MT, We Begin at the End is a haunting and somber tale of just how far-reaching secrets of the past are and the destruction they can cause to the lives of the innocent.

Duchess Day Radley is a 13-year-old self-described outlaw, doing her best to survive in a world where her mother is practically absent, father unknown, and in which she is the sole caretaker of her 6-year-old brother. Her mother, Star, is a troubled soul who always seems to find herself on the wrong end of the wrong guy or situation.

Thirty years prior, Star’s sister was killed when she was struck by a car driven by Thomas King. Now, Thomas is being released from prison. His best friend and Chief of Police is Walk, a man who’s done his best to look after Duchess and her brother, offer unwavering support to his childhood friend, and try to keep his own problems secret from everyone in town.

Tragedy strikes, as it often does when too many dark storylines converge, and Walk takes Duchess and her brother to the home of their grandfather in Montana. But it seems tragedy is never far away from the outlaw Duchess Day Radley and the ghosts of Cape Haven haunt her even in Montana. Duchess and Walk will both have to learn that where we look for family isn’t always where we think it should be, but where we make it.

We Begin at the End is a mesmerizing and tragic novel. Chris Whitaker has done an amazing job of writing in a voice that wraps around you and makes you feel warm and safe as you watch this tragedy unfold around you. Duchess is a raw and occasionally abrasive character and sometimes I felt I might be tempted to dislike her, but in the end, she is doing the best she can to protect herself in the circumstances she was given.

I received an ARC audiobook of We Begin at the End and the performance was well done and just as engaging as the storyline. At no point did I feel the voice of the performer was at odds with the characters or the story. The performance and storyline blended seamlessly.

If you’re into tragic tales, I highly recommend We Begin at the End.