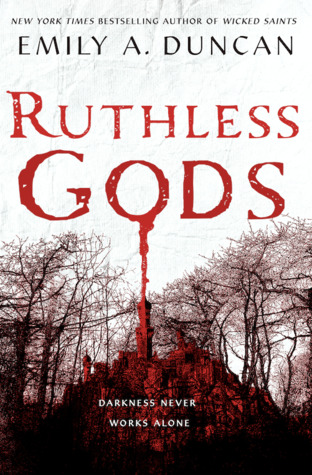 Ruthless Gods picks up in the same dark, gothic, and mind-bending world that Wicked Saints left us in. But then it throws in even more betrayal, far too many WTH moments to count, and of course, a cliffhanger at the end.

In Ruthless Gods, Nadya, Serefin, and Malachiasz are back—and I still don’t know who to root for. They’re all just as dark and full of angst as in book one, but I can’t seem to actually dislike any of them. Malachiasz—in his monstrous new form—has fled to the salt mines. Serafin is struggling to keep his kingdom from being overthrown, while also struggling to maintain his sanity against the relentless new voice in his head. And Nadya is still dealing with the aftermath of the gods having left her. But when they come together again, the story becomes rich with betrayal, vengeance, and, well…blood! Now, I love a dark, vengeful book, but there are a few things that have me struggling with Ruthless Gods. Emily A. Duncan used a lot of descriptive repetition in this book, it comes off as very heavy-handed rather than being seamlessly woven into the storyline. I also feel the characters—although I’m still interested in how they finish this journey—aren’t as emotionally engaging in this book as in book one.

Overall, I didn’t find Ruthless Gods as enjoyable as Wicked Saints, but I’m still looking forward to the next book because I was fully invested after book one and I need to know what happens!

*I received a copy of Ruthless Gods from NetGalley and St. Martin’s Press in exchange for an honest review

No comments yet
#yaseries Book review book reviews Ruthless Gods by Emily A. Duncan Something Dark and Holy #2 YA authors YA books YA fantasy