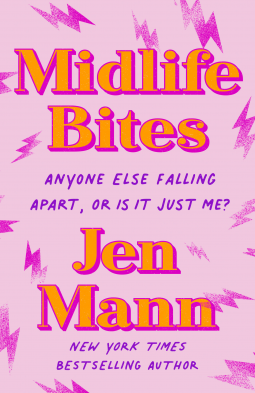 How have I gone this long without having Jen Mann in my life?

Several months ago I saw a book entitled Midlife Bites on Netgalley. As someone who is in that particular time of life—and has discovered it can indeed bite—I requested it immediately. Admittedly I sometimes request ARCs based on title alone only to be disappointed, but this is a resounding case of it working out in my favor. First, in case you don’t know of Jen Mann, she authors a blog called People I Want to Punch in the Throat (and had I only known that I would also be a fan of her). In one particular blog post Mann laid bare some of the struggles she was having and found that they were resoundingly shared by her readers.

Midlife Bites is a bit of an extension of that blog post, tacking all the things women generally don’t talk about with regards to aging and the act of living and being women. While Mann’s viewpoint may seem harsh to some, it’s truthful, bold, non-nonsense, and so freaking funny! Mann writes in a way that’s engaging, honest, and makes even the most heart-breaking and mortifying topics seem survivable.

Midlife Bites will be released January 4, 2022, and I highly recommend it.