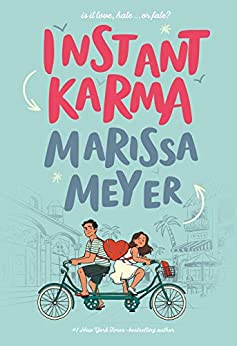 Marissa Meyers fans rejoice! A new book has been released. But if you’re expecting something similar to The Lunar Chronicles or Renegades, this is NOT that book. Instant Karma is a contemporary YA about Prudence Barnett, a rather tightly wound high achiever. As the book opens, Prudence has been paired with Quint Erickson for a science project. Quint is cute, likeable, and highly unreliable and, as Prudence expects, he fails to even meet her low expectations of him. The two can not see eye to eye on their project and as a result, Prudence is at risk of making her lowest grade ever. She’s given one chance to work with Quint to improve their grade, but he’s definitely not into it and Prudence can’t imagine spending any more time with him. But soon she finds herself finding out more about Quint and discovers how prevalent a role karma is playing all around her. From punishing hecklers at a karaoke event to rewarding people who do good, karma seems to be all around—maybe even influenced by Prudence?

Instant Karma is an enjoyable, modern, story and Prudence, though she can be way too high strung sometimes, even becomes kind of likeable. Quint is always likeable too, but some of the other “characters” really steal the show. While Instant Karma isn’t as complex of a story as some of Meyer’s other novels, it’s still engaging and enjoyable. I received an ARC of the audiobook for this novel and found the performance to be great. The performer did a great job with the voice of the characters and seemed remained true to the energy and mood of the story throughout.