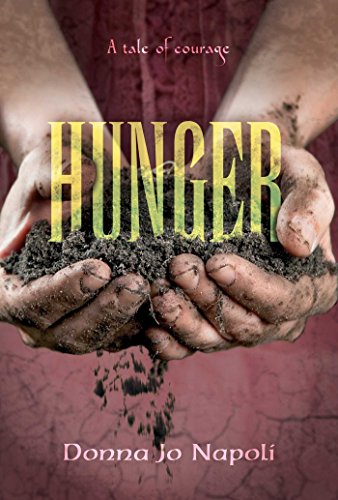 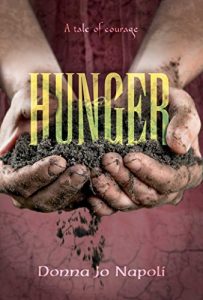 “Through the eyes of twelve-year-old Lorraine this haunting novel from the award-winning author of Hidden and Hush gives insight and understanding into a little known part of history—the Irish potato famine.

It is the autumn of 1846 in Ireland. Lorraine and her brother are waiting for the time to pick the potato crop on their family farm leased from an English landowner. But this year is different—the spuds are mushy and ruined. What will Lorraine and her family do?

Then Lorraine meets Miss Susannah, the daughter of the wealthy English landowner who owns Lorraine’s family’s farm, and the girls form an unlikely friendship that they must keep a secret from everyone. Two different cultures come together in a deserted Irish meadow. And Lorraine has one question: how can she help her family survive?

A little known part of history, the Irish potato famine altered history forever and caused a great immigration in the later part of the 1800s. Lorraine’s story is a heartbreaking and ultimately redemptive story of one girl’s strength and resolve to save herself and her family against all odds.”

I’ve been a fan of Donna Jo Napoli’s writing since I stumbled upon Hush while doing reviews for an old YA book review site. When I saw Hunger listed on NetGalley I requested it right away and crossed my fingers that I’d get approved. I was not disappointed.

Napoli has once again proven that she is a master in historical fiction. Not only has she constructed a well-researched world for her characters, but she’s delivered a heart wrenching storyline that kept me thoroughly tied to the pages.

Hunger is set during the Irish Potato Famine of the 1840’s. Twelve-year-old Lorraine, awakens one morning to the panicked sounds of her parents desperately trying to salvage their crops from another devastating fungal outbreak. In Lorraine’s small community of cottier farmers—and across Ireland—the Irish tenants face another winter of starvation and disease while their British landlords ignore—and even deny—their plight.

Lorraine soon finds herself walking a line between her dying friends and family and a friendship with the landlord’s sassy and self-involved daughter. Lorraine finds herself trying to convince Susannah as to the reality of the plight of the Irish, but Susannah has been raised believing the Irish have every opportunity if only they would take it upon themselves to fulfill them.

Hunger is filled with heartbreaking realities and conflicting moral decisions that must be made as Lorraine and her friends face a crisis of historical proportions. I was mesmerized, heartbroken, and could even feel the hunger—and guilt—as I read. Donna Jo Napoli has proven again that she is a master of historical fiction.

Thank you to NetGalley and Simon & Schuster for the opportunity to review this ARC in exchange for an honest review.

Buy Hunger: A Tale of Courage here on Amazon.com