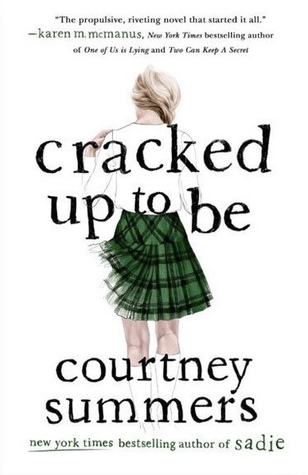 Parker Fadley is angry.
Until recently she was St. Peter’s High’s token “perfect” girl: cheerleading captain, future valedictorian, girlfriend of the most popular boy, and favorite of all the teachers. Now Parker is distancing herself from everything that made her perfect. She’s barely on track to graduate, drinking heavily, and isolating herself from her former friends and her family. She isn’t just isolating herself though, she’s actively driving them away with her acerbic tongue and hateful demeanor. But what happened to cause such a drastic change in Parker? She isn’t saying.

Cracked Up To Be was recently rereleased for its 10th anniversary. Courtney Summers is the author of another book I read quite recently, Sadie, and I jumped at the chance to read another of her books. This book offers the same raw, unapologetic glimpse at a very realistic issue. And, while Parker might seem angry, hateful and hard to connect with for many readers, it’s worth the time to travel this book with her. The revelation of what caused her drastic change is heartbreaking and tragic.
For those who don’t shy away from the tragic and difficult characters, I highly recommend Cracked Up To Be.

*I received a copy of Cracked up to be from St.
Martin’s Press and Netgalley in exchange for an honest review*