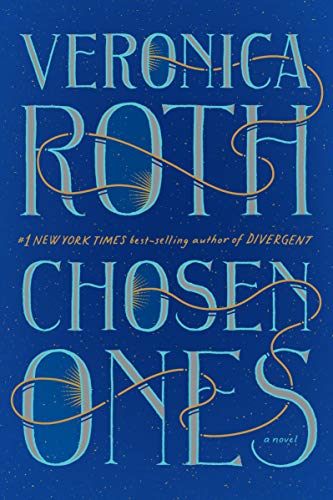 Veronica Roth has joined the ranks of YA authors moving into the adult market. Her latest novel Chosen Ones is described as follows: A decade ago near Chicago, five teenagers defeated the otherworldly enemy known as the Dark One, whose reign of terror brought widespread destruction and death. The seemingly un-extraordinary teens—Sloane, Matt, Ines, Albie, and Esther—had been brought together by a clandestine government agency because one of them was fated to be the “Chosen One,” prophesized to save the world. With the goal achieved, humankind celebrated the victors and began to mourn their lost loved ones.

Ten years later, though the champions remain celebrities, the world has moved forward and a whole, younger generation doesn’t seem to recall the days of endless fear. But Sloane remembers. It’s impossible for her to forget when the paparazzi haunt her every step just as the Dark One still haunts her dreams. Unlike everyone else, she hasn’t moved on; she’s adrift—no direction, no goals, no purpose. On the eve of the Ten Year Celebration of Peace, a new trauma hits the Chosen: the death of one of their own. And when they gather for the funeral at the enshrined site of their triumph, they discover to their horror that the Dark One’s reign never really ended.

I begged for this book based on that description, what an exciting premise! I was happy to get a review copy and days later I won a print copy from the publisher (so double thanks to Houghton Mifflin Harcourt).

To start, I was immediately drawn into the storyline. Sloane, one of the chosen ones, is angry and empty ten years after helping defeat the Dark One, even as an angry character though, I found her intriguing and relatable. She lived through experiences that left her with significant trauma and—along with the other Chosen Ones—is now facing a public resurgence in interest about her. With the ten-year anniversary of the battle against the Dark One coming up, those who fought him have come together again, but one is going to die and the rest are about to be thrust into a situation they could never have imagined.

Part one was so full of emotion and was easily lost in my empathy for these characters and what their lives have become since being forced to defend the world. Part two for me, was a bit of a letdown. There was a drastic change in the story line, and it turned into a very different book. I’m not a huge sci-fi fan (if that’s a spoiler—sorry) and this had a definite sci-fi feel for me starting in part two. The overall story was still unique and there were several intense moments, but it didn’t progress at a pace that’s as fast as I would have liked. The one thing I found completely unique and frightening were the Drains, used by the Dark One.

Overall, Chosen Ones was engaging and unique, but didn’t give me the impact I’d hoped for.

No comments yet
book reviews Chosen Ones by Veronica Roth