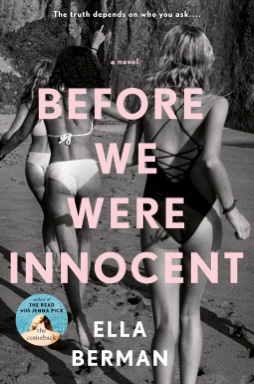 Ten years ago, what should have been a trip filled with sunshine and memories forever altered the lives of friends Joni and Bess when their friend, Evangeline died. Both girls were accused of conspiring in Ev’s death and found themselves in a Greek prison awaiting their very uncertain fate.
Acquitted of any wrongdoing, and returned to the states, the experience has led to very different and divergent lives for Bess and Joni. While Bess has locked herself away from the world, working and living away from the public eye, Joni has capitalized on her infamy, becoming the best selling leader of a self-improvement empire.
But now, ten years later, Joni is at Bess’s door. Joni’s fiancée has gone missing and Joni turns to Bess for support. All the insecurities and secrets from Greece bubble to the surface as the police and the media focus on the friends once again. Can Bess face being in the spotlight again? Can she face being so thoroughly enmeshed in Joni’s life or should she put more distance between them? More important of all- is Joni responsible for Willa’s disappearance?

Before We Were Innocent is an upcoming thriller from Ella Berman with a strong summer vacation and impending doom vibe throughout. The story is engaging, the “what if” moments tantalizing, and the secrets so thick you can barely make your way through them. Berman has done a fantastic job of highlighting the complexities of female relationships—especially those on the cusp between girlhood and adulthood.

The story of what happened to these girls after their friends death (how the media turned innocent actions into maniacal ones and exposed their most private lives) is heartbreaking, but so similar to what is seen in the media so often (I couldn’t help thinking of Amanda Knox). The pacing and intensity of the story was enough to pull me from the beginning to the end with no lulls.

Before We Were Innocent is such an engaging and intense read!

*I received a copy of Before We Were Innocent from Berkeley Publishing and NetGalley in exchange for an honest review.*