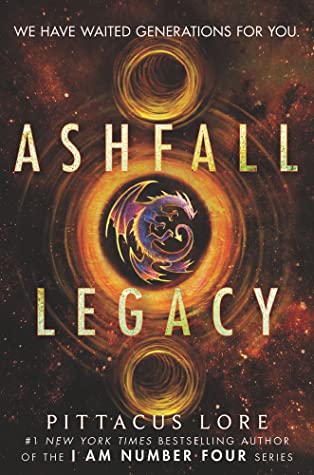 I was a huge fan of I Am Number Four when it first came out and enjoyed all of the Lorien Legacy books I read after so I was excited to see a new series by Pittacus Lore and I received an advanced copy audiobook from NetGalley.

Syd has lived most of his life on the run. At the age of 10 his mom explained how his dad—now presumed dead—was from Denza. Syd’s mother, a scientist, had fallen in love with him before he returned to space on the mission he never returned from. Syd toys with the idea that his mom’s story may be the product of an unhealthy mind, but most of the time he’s fully supportive of this life they live.

One day, Syd helps a stranger conquer an impossible to beat video game, opening a message directly for him. Soon, Syd is on his way into space with his long-lost uncle. His world is turned upside down as he’s introduced to new life forms and a world he could never have imagined. Denza and earth are both in danger and it falls to Syd to help protect the future of both.

This book started out great. I was drawn in and interested by the complexity of a half-alien, half-human living a life on the run with his human mother. I love the idea of a dangerous alien breed on earth, hunting them down (a lá the Lorien Legacies). Unlike the first series though, Ashfall Legacy is a more traditional type of sci-fi novel. Syd travels to space, there are alien races, and advanced technology, strange planets, and lots of histories of the aforementioned. I guess I’m more of a sci-fi lite reader, so this became a bit much for my preferences even though it had a similar feel for everything I loved about the Lorien Legacies series.

Ashfall Legacies, while a stronger sci-fi than I generally enjoy, is an engaging adventure and an interesting new series from Pittacus Lore.